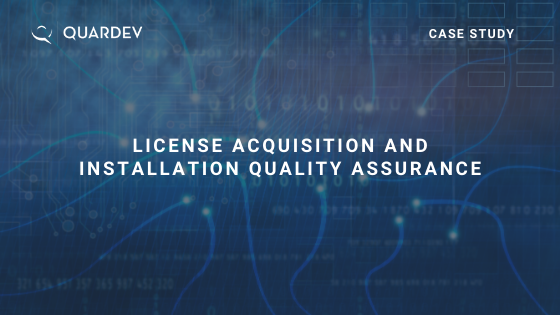 The client a leading innovator in supporting optical design, including delivering design software, training and support services that set the highest standards for the optical and illumination industries. The client makes lens design software for analysis of imaging and illumination systems. This company works to improve optical performance, shorten the time to market, and reduce costs. Quardev was involved in two separate projects with this client. These projects focused on the verification of the installation process and licensing of new products.

Quardev was engaged by the client on two separate occasions, first was to verify the installation process of their new lens product, an add on to third party CAD (computer-aided design) packages. This project required the licensing of the client’s product as well as the CAD package and more confirmations. While challenges occurred, such as problems getting the licenses and limited documentation on with the third-party software, the team was able to move through these and ensure a smooth process for their customers.

The second project was to verify the installation process, including license acquisition from sales and support staff for a new product and package. This project involved much fewer challenges and had a simpler process. However, challenges included testing the entirety of the downloading process and communicating with a sales rep to acquire each license.

The first project focused on the licensing of an add on (CAD) program that generated the ability to validate designs created in the client’s lens design software. It streamlines the process of transferring data from optical engineers to mechanical engineers and maintains full fidelity of optics testing parameters. The purpose of the project was to verify that the installation routines for the program were rock solid and to expose any issues so that they may, in turn be corrected. The installation process required licensing of the client’s product as well as the CAD package. There had to be confirmation of valid licenses and component installation on several Windows versions. Testing was done on three platforms, Windows 7-64, Windows 10-64, and Windows Server 2012 R2.

Although this project faced its difficulties using multiple licenses and having a lack of available documentation, Quardev was able to verify enough of the installations to provide value to the client and prompt them to return a second time.

The second project involved the verification of the installation process of another lens design and modeling package. This package, however, was a stand-alone and not a CAD package add on, providing a much smoother verification process. This project included license acquisition from the client’s sales and support staff who were aware that Quardev would be contacting them, allowing the process to proceed as planned. Firstly, the program was validated as a piece of software through a series of tests. After completion, Quardev continued to extensive, high level End to End testing, running through the entire process and verifying its completion.

This project had much less complication involved, with only one license acquisition, supportive sales and staff members, more information, no third-party app, and test plans written in which to follow. All leading to an overwhelming success and satisfaction of the client.

Due to the nature of this project, implementing new technology was not a factor as the goal was the execution of existing tests. The team used VirtualBox tool to spin up a clean environment from which to run the tests.

The objectives were met within the time frame and budget for both projects. The client was pleased with the work done by Quardev and thankful for the assistance in bringing their optical products to market, indicating they would likely work with Quardev again in the future.